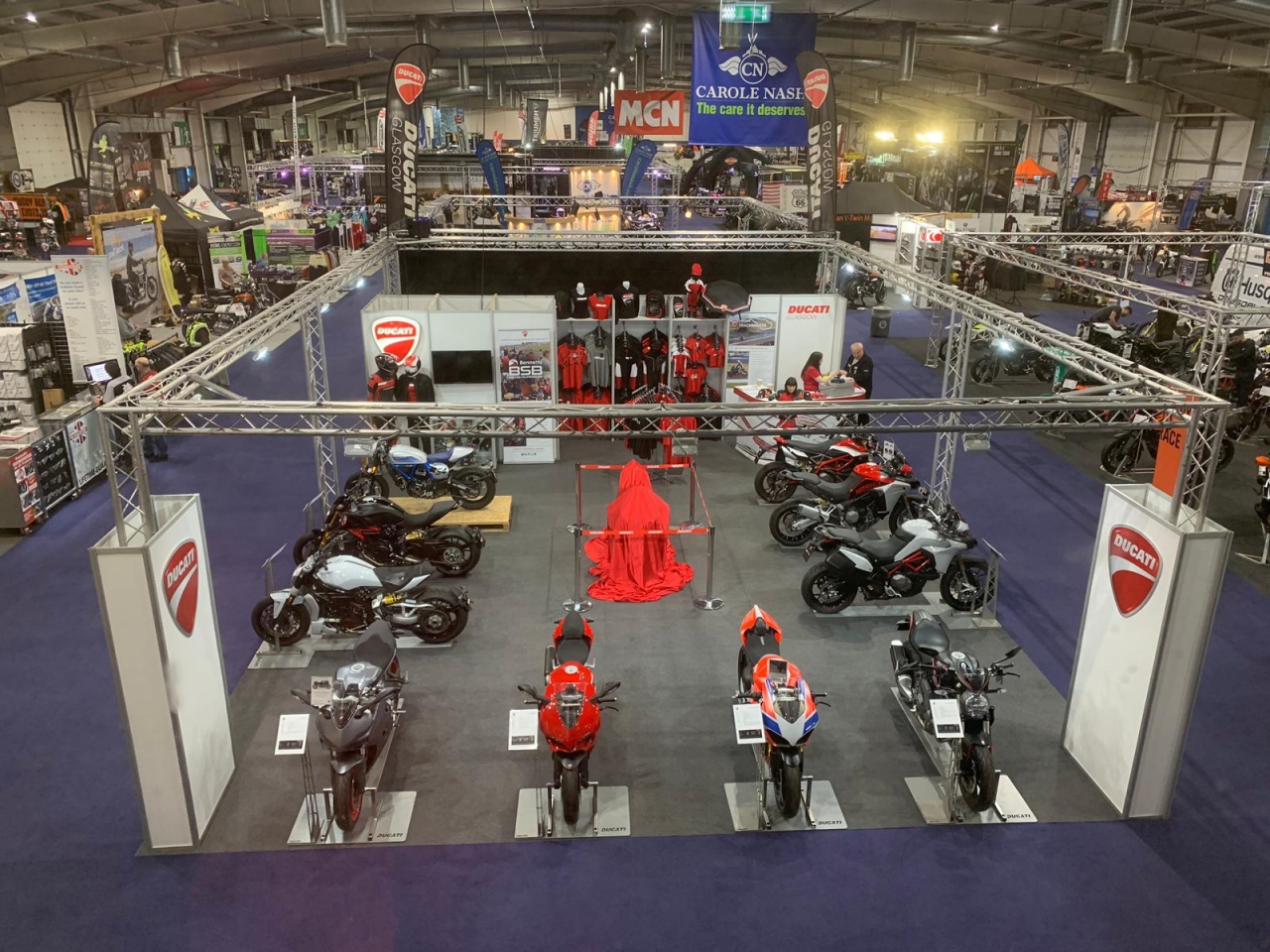 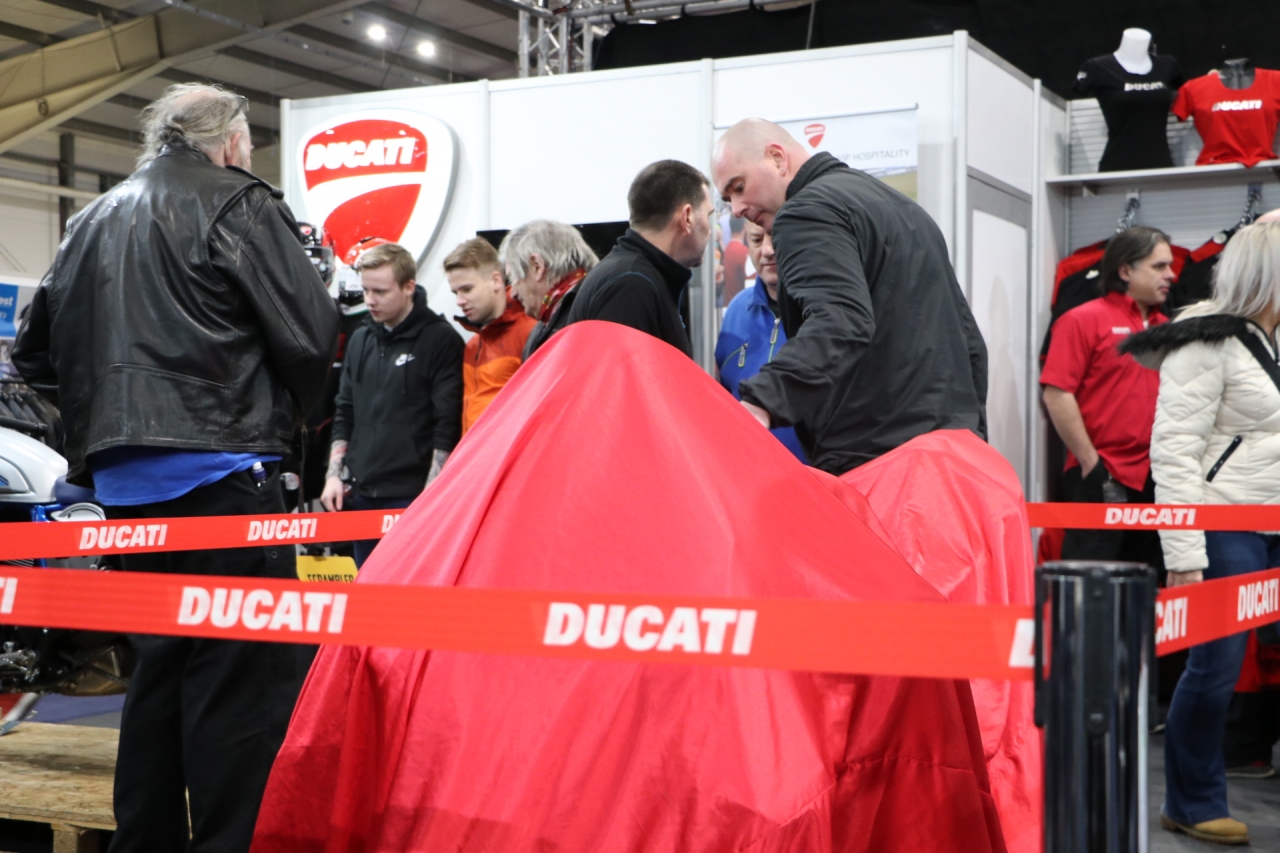 Ducati Glasgow supported by Ducati UK presented for the first time in Scotland the 2019 range which consisted of eleven bikes, including seven completely new motorcycles, Corse models and selected Ducati Scramblers.   The highly anticipated Ducati Panigale V4 R was revealed at 10am on both Saturday and Sunday to a huge surrounding audience.

Ducati Glasgow Managing Director, Martin Rees hosted the unveiling and revealed some of the highlights for the most talked about Ducati of the year.

“Before we take the covers off, we’d like to give you some idea of the technical specification of this machine. The V4 1100cc engine that Ducati released last year has been test ridden by MCN News, voted as the Best Bike of The Year 2018 and they claim it’s the fastest road bike they’ve ever tested, reading 0 to 150mph in 9.5 seconds. So the performance of the previous model is quite astounding! 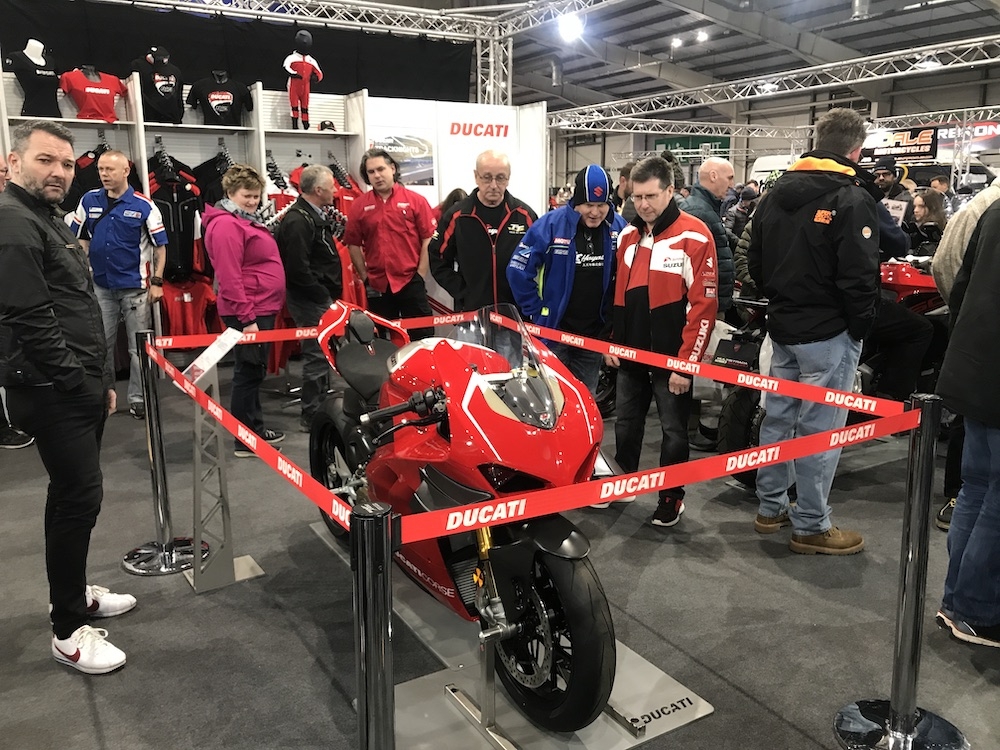 Now for this model, it’s been homologated, reduced to a 998c V4 engine based on the 2014 Moto GP machine with the same architecture, although this V4 R has an even higher 221bhp. It also revs to a really heady 16,500 rpm and when you fit the race exhaust system it brings it up to 234bhp so that really does compare to the GP specifications. And then on top of that, this bike has also received a full new chassis based closely on the V4 and V4 Corse. This chassis is again homologated for World Superbikes.

Of course, the last thing to mention is the wings on the front. There has been plenty of chat about these wings! These wings are there to create downforce, and the downforce works in 2 different ways. 1. They give you up to 30kilos of added downforce at 165mph, and 2. when you're breaking the wings also help to give the bike added stability and keep the wheels on the deck. This bike is really built for skilled riders, those who admire World Superbike Riders, like Chas Davies and Alvaro Bautista.” 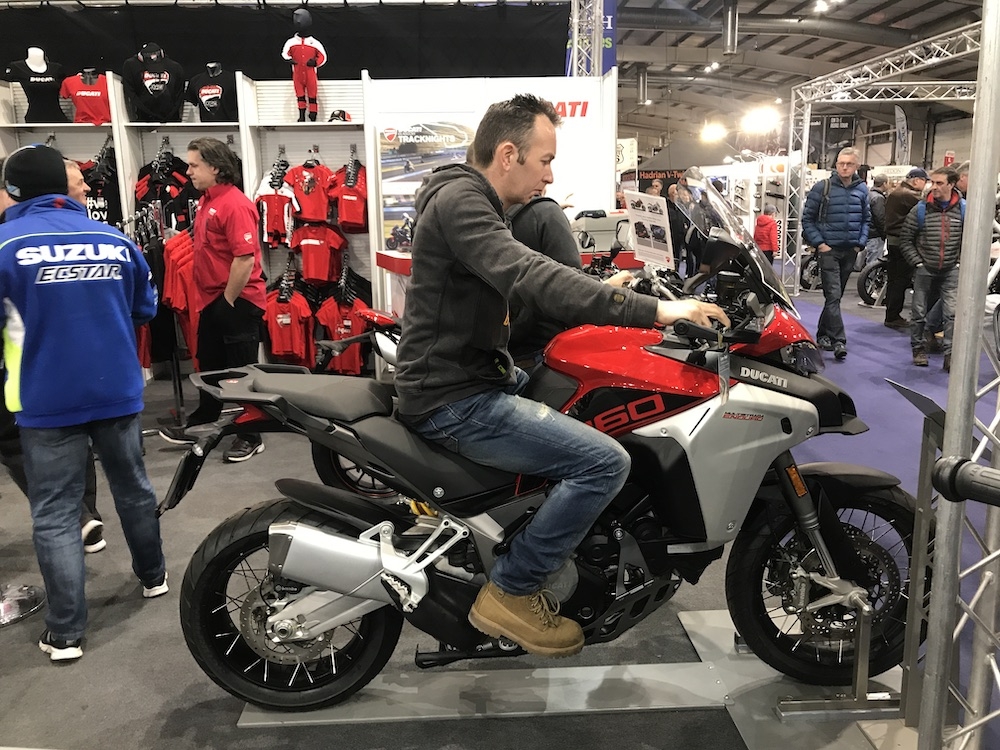 The bikes which were presented by Ducati Glasgow at the Scottish Motorcycle Show were:

*Seen for the first time in Scotland 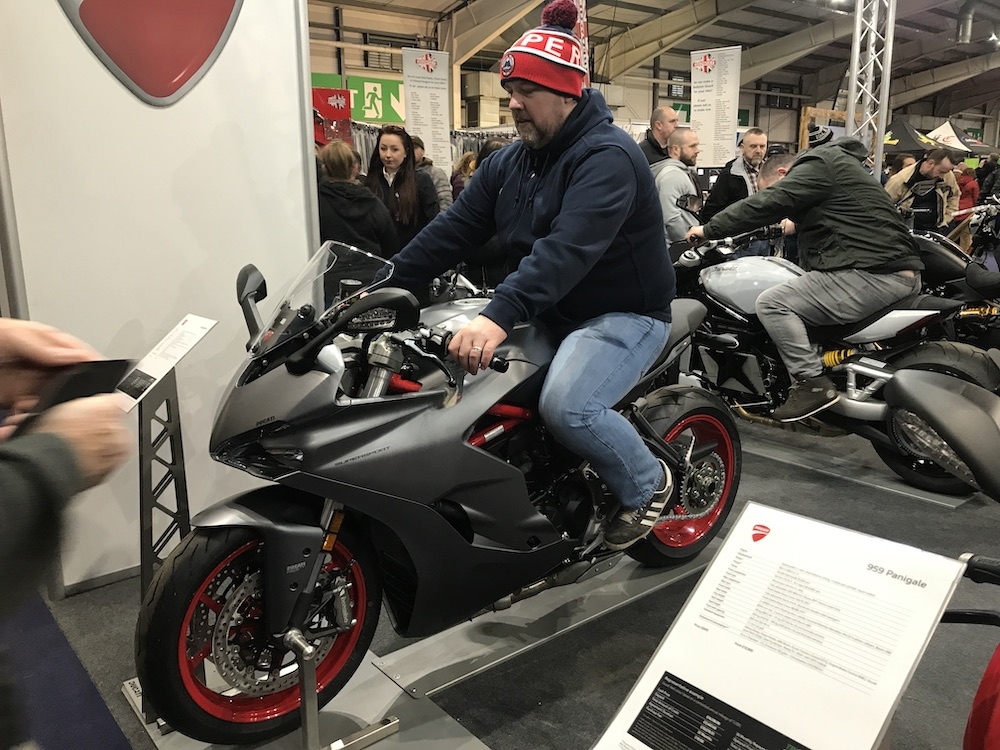 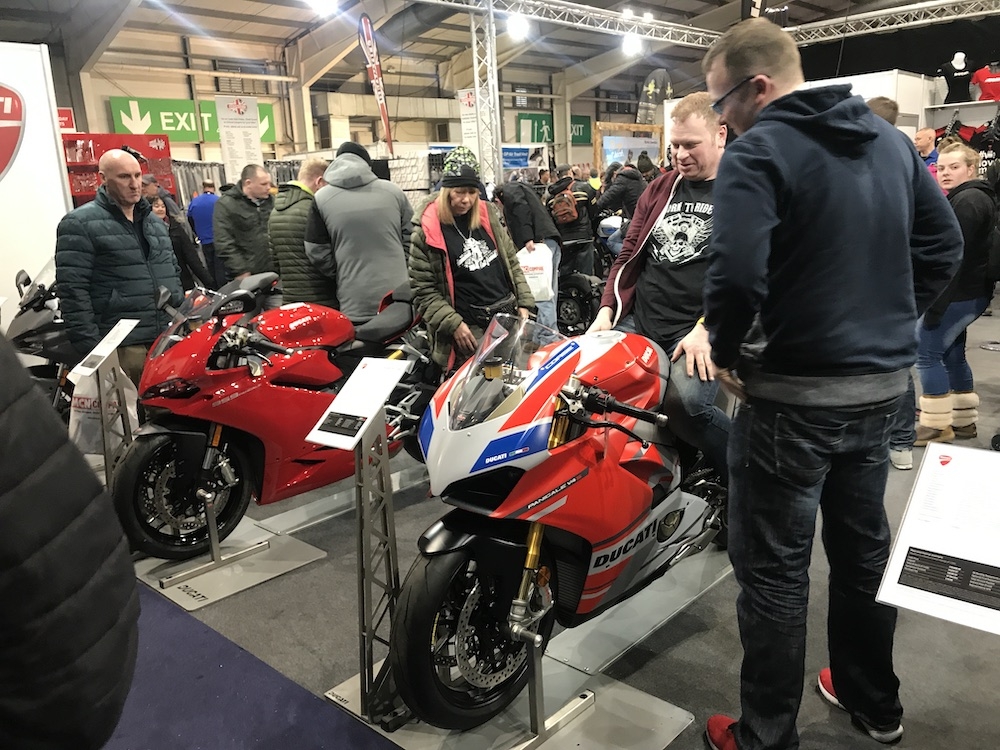 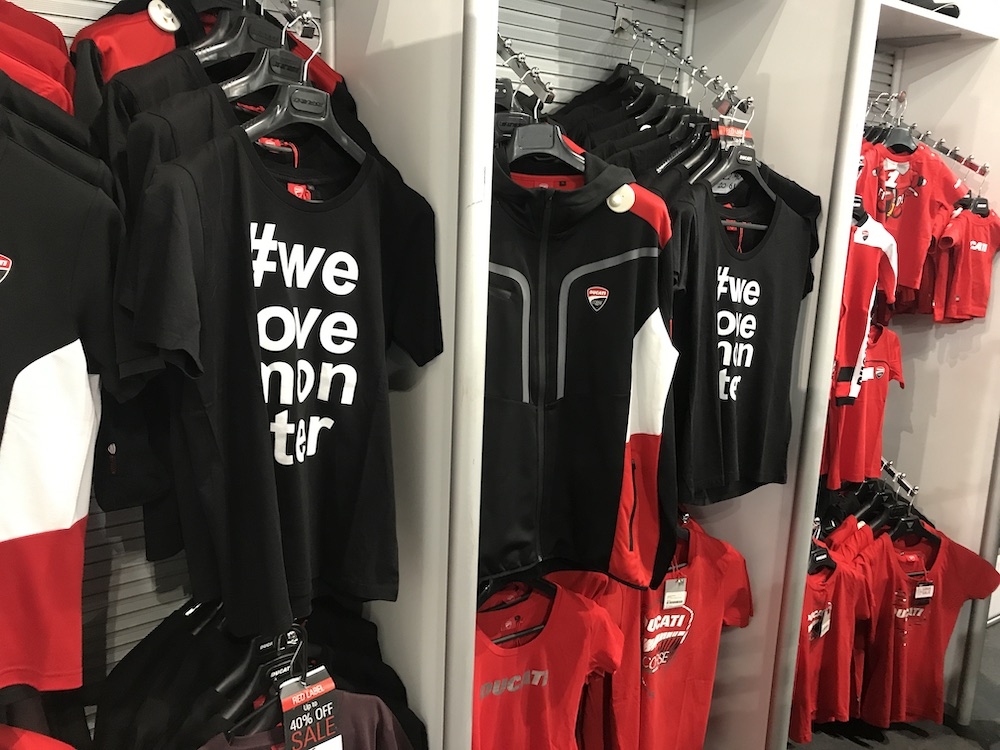 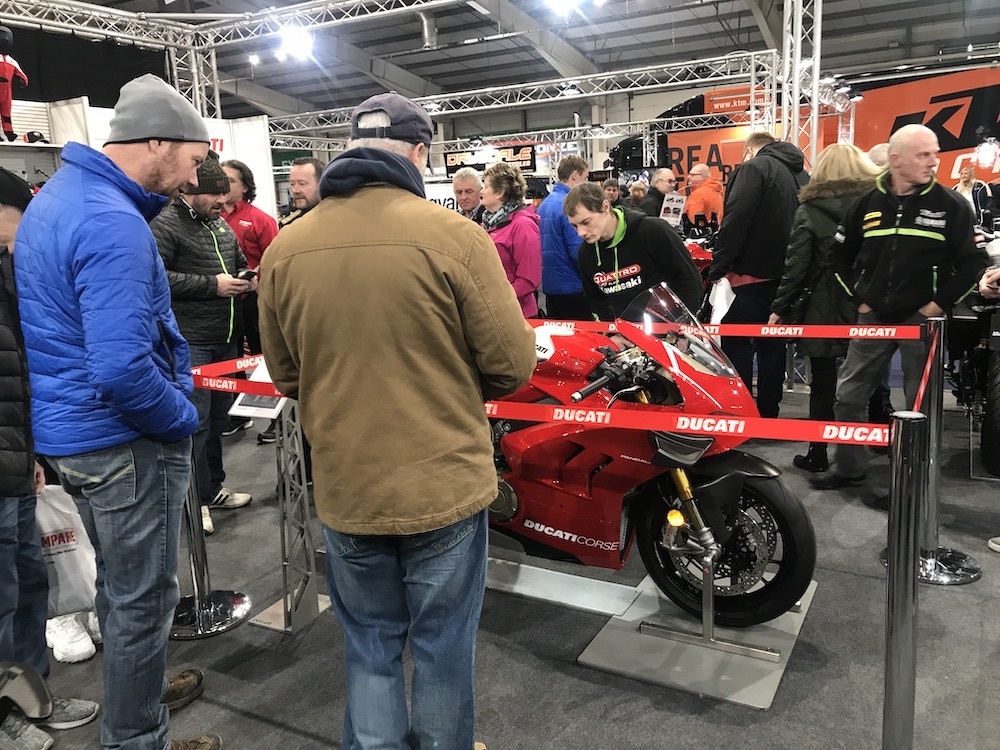 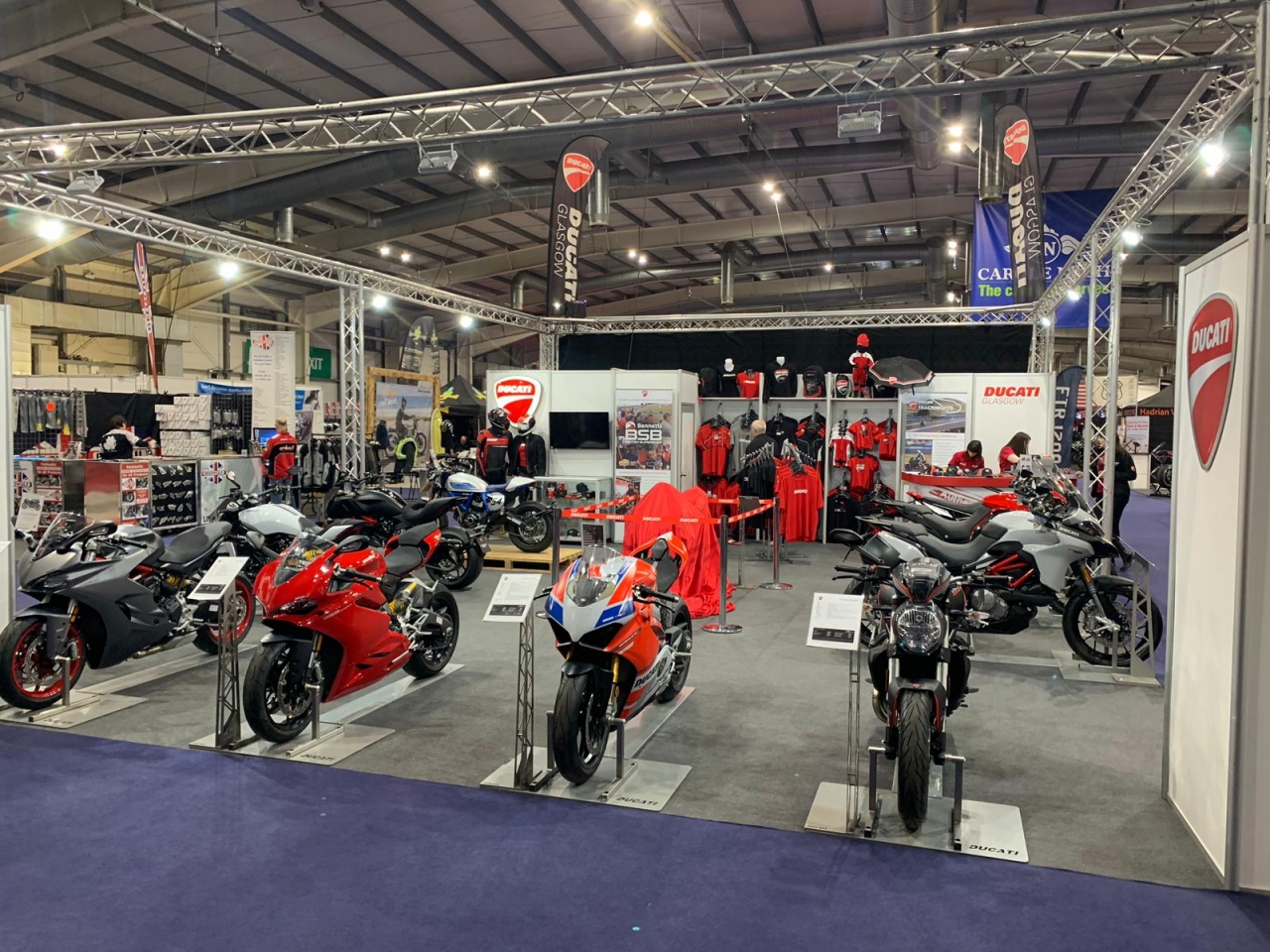 If you couldn’t make the Scottish Motorcycle Show this weekend, don’t worry. Ducati Glasgow have a Ducati Panigale V4 R on display at their Pit Lane Showroom.

The next major event for your calendar should be the Ducati Season Launch, where Ducati Glasgow will have available for test ride, the brand new 2019 fleet.

Get your free tickets now here >

For more information on the above models, part exchange quotes, test riding and other events, call the Ducati Glasgow Team on 0141 333 4998 or email info@ducatiglasgow.co.uk