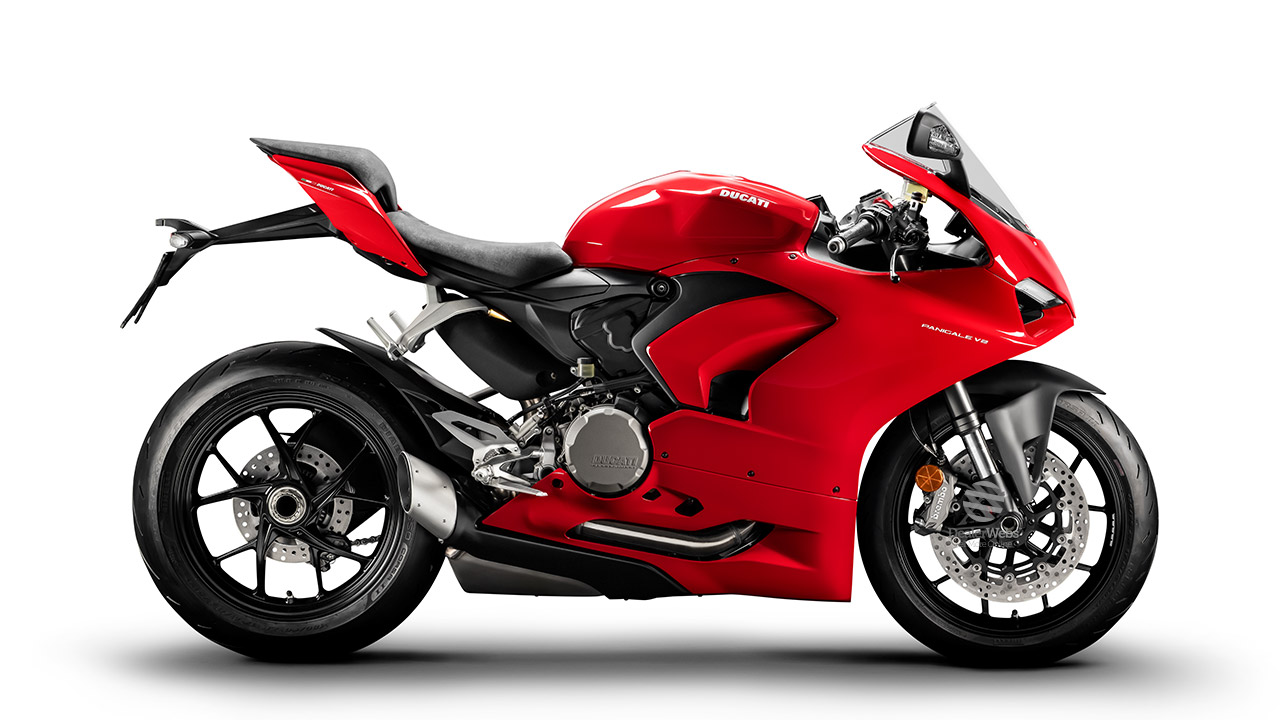 The twin-cylinder Panigale has been given a thorough makeover. Renamed the Panigale V2, it takes a totally new design, it features sophisticated electronics based on a 6-axis inertial platform and, thanks to a more comfortable rider seat and the suspension set-up, offers better yet safer sports performance while making road riding more enjoyable and user-friendly than ever.

The name informs Ducati twin-cylinder enthusiasts that the bike is powered by the 955 cm³ Superquadro.

The perfect fusion of power and elegance

The new Panigale V2 Is a beefy yet compact bike of essential design with clear-cut lines that convey power without compromising classic Ducati superbike flair.

The Panigale V2 features the single-sided aluminium swingarm, the hallmark of every high-end sports Ducati. The extensive fairing highlights the more compact twin-cylinder Superquadro engine (smaller in comparison to the Desmosedici Stradale), creating a bike that is visibly leaner and less intimidating than the Panigale V4. Dominating the front end are the two large air intakes, the upper parts of which incorporate the full-LED headlight. The new intakes merge with the existing air feed layout via newly designed ducts that, delivery rates remaining equal, lose less pressure than the previous ones, thus boosting intake efficiency.

The headlight has been compacted with the express intent of giving the intakes themselves - especially with the bike at standstill - a more menacing air. Two specially shaped rims on the undersides of the air intakes speed up air inflow. The full-LED headlight consists of a Daytime Running Light (which creates a dual 'eyebrow' effect, highlighting the upper rim of the air intake) and two compact dipped beam / high beam LED modules.

The fairing has a 'dual layer' configuration: a main layer that extends upwards and merges into the tank via two sturdy struts, and a secondary layer that also acts as an air vent. This 'dual layer' solution revives the clean lines typical of Ducati sports bikes, famed for their full-fairing look. The fairing underside merges visually with the under-engine silencer, which terminates in an extremely compact right-side-only end pipe.

The tail is built on a steel Trellis subframe lined with plastic covers that runs from the vertical cylinder to the tailpiece, of winged, spoiler-like design.

The tailpiece incorporates the full-LED tail light, also wing-shaped: while a one-piece assembly, the light has two distinct parts as per Ducati sports bike tradition. The Panigale V2 combines a traditional Ducati Red livery with black 5-spoke wheels of a Panigale V4-inspired design.

The 955 cm³ twin cylinder Superquadro engine complies with Euro 5 standards. Compared to the engine on the 959 Panigale it delivers an additional 5 hp and 2 Nm more of torque. it also features a new compact exhaust silencer, routed entirely underneath the engine.

With a maximum power of 155 hp at 10,750 rpm and a torque of 104 Nm at 9,000 rpm, this twin cylinder engine delivers power smoothly and enjoyably on the road while remaining forceful - yet always under control - on the track.

Performance enhancement largely stems from the new injectors (two per cylinder, one above and one below the butterfly, larger, and re-angled) and the new inlet ducts which, delivery rates remaining equal, lose less pressure than their predecessors, thus boosting intake efficiency. Oval throttle body dimensions remain unchanged with an equivalent diameter of 62 mm. Throttle bodies are controlled independently of each other via a full Ride by Wire system.