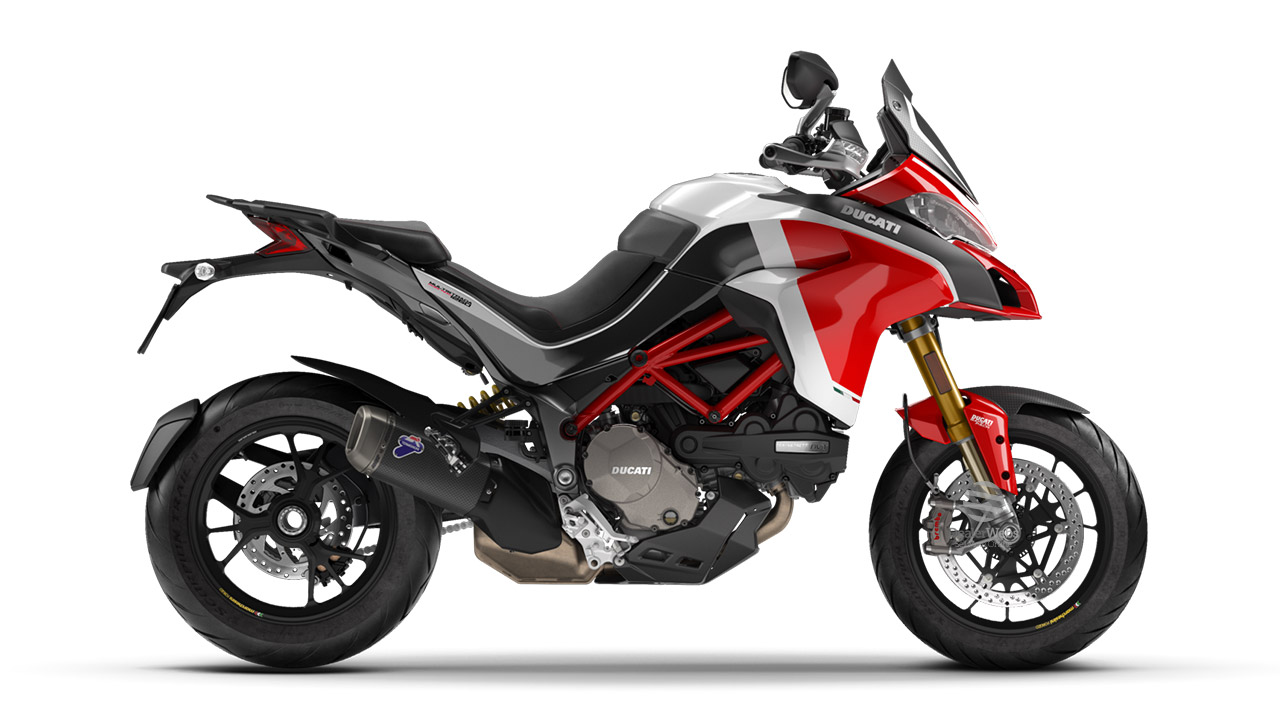 All you need to secure and reserve your new Ducati is a £500 deposit, payable over the phone or in store.

We can offer you a competitive range of finance and insurance products tailored to your needs, as we are an FSA Authorised and Regulated Business and a Black Horse Approved Finance Dealer.

The Pikes Peak version - which draws its inspiration from the legendary American hill climb race - really brings out the sports character of the Multistrada 1260.

The Pikes Peak International Hill Climb, also known as the "The Race to the Clouds", is held in an area of the Rocky Mountains some 16 km west of Colorado Springs. A distance of 20 kilometres separates the starting line, at an altitude of 2,862 metres, from the finishing line at 4,300 m. It's an incredibly tough competition: Ducati has already won it three times.

Developed on the technical foundations of the Multistrada 1260 S, the Pikes Peak version benefits from the 1262 cc Euro 4 compliant Ducati Testastretta DVT engine and new chassis dimensions, which include a new front end geometry and a longer swingarm. Along with a race-inspired colour scheme, the Multistrada 1260 Pikes Peak comes equipped with new forged aluminium wheels, which are lighter than those of the Multistrada 1260 S. In addition, the bike is fitted with the Öhlins fork and Öhlins TTX36 shock, which can both be adjusted mechanically.

In addition to the silencer and nose fairing, fitted as standard, a carbon fibre Ducati Performance silencer by Termignoni (EU type-approved) and a low racing-type carbon fibre screen are also available for the Pikes Peak version. Further carbon fibre components include the front mudguard, hands free cover and front side panels, while the red-stitched seat has been specially designed to bring out this Multistrada's racing spirit.

Thanks to the 1262 cc Euro 4 compliant Ducati Testastretta DVT engine, the Multistrada 1260 Pikes Peak offers an even more enjoyable riding experience. 85% of the torque is in fact already available below 3,500 rpm with, compared to the previous model, 18% increase at 5,500 rpm. This makes the Multistrada 1260 the motorcycle in its category with the highest torque values at 4,000 rpm, that is the most frequently used rev range.

This level of performance is easy to manage too, thanks to the new Ride by Wire which allows for an even smoother fuel supply, and to the DQS (Ducati Quick Shift) Up & Down, which contributes to an improved riding experience thanks to seamless and accurate gear meshing during both upshifting and downshifting.

The Multistrada 1260 Pikes Peak is equipped as standard with the Inertial Measurement Unit (IMU), developed by Bosch, which dynamically measures pitch and roll angles and acceleration along the 3 axes, raising performance and safety standards even further. Equipped with Cornering ABS, Cornering Lights (DCL) on the full-LED headlight, Ducati Wheelie Control (DWC), Ducati Traction Control (DTC), Vehicle Hold Control (VHC) and Cruise Control, the Multistrada 1260 Pikes Peak is a concentrate of technology that also features, as standard, a Bluetooth module; the latter, via the Ducati Multimedia System (DMS), lets riders connect the bike to a smartphone and manage key multimedia functions (incoming calls, text messaging, music) via the switch gears and display information on the TFT dashboard, which has been renewed both in terms of graphics and logic.

Like other bikes in the family, the Multistrada 1260 Pikes Peak can mount one or more Ducati Performance accessory packages. Also available - in addition to individual items - are the Touring Pack (which includes heated grips, panniers and centre stand), the Urban Pack (with top case, tank bag with tank lock and USB hub to charge electronic devices), the Enduro Pack (consisting of supplementary LED lights and Ducati Performance components by Touratech: engine crash bars, radiator crash bars, sump guard, a broader kickstand base and off-road foot pegs).